specialize at pvc sheet board extrude 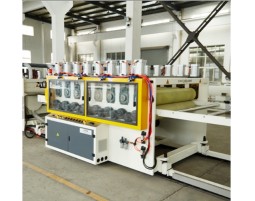 2. Twin-screw PVC extruder production: the first step is to pre-mix the ingredients (hot mixing and cold mixing) so that the mixture can achieve better dispersion and brushing effect, while achieving higher apparent density. The second part is to use twin screw machine premix for direct extrusion profiles. It is suitable for large-scale production.

Mixing system includes hot mixing and cold mixing system, which is a high-speed mixing unit. Both hot mixing pot and cold mixing pot are equipped with import and export containers and sealed containers with motor-driven agitators. The purpose is to greatly disperse and mix the components. The wall of cold mixing pot is generally equipped with circulating cooling water system to enhance cooling through and increase production rate; the volume of cold mixing pot is at least that of hot mixing pot. Twice, the larger volume, on the one hand, is beneficial to the dispersion of hot mixtures in cooling, on the other hand, it also prevents the cold mixtures from being discharged in time with enough air force to accommodate the raw materials released by the hot mixer. After hot mixing and cold mixing, the raw material is called dry mixing. The basic requirements for dry mixing are good quality of dry mixing, stability and uniformity between batches of mixing and unbearable dry mixing (such as insufficient heat mixing or excessive heat mixing). It is very difficult to produce good products by adjusting the extruder technology.